CD Genomics is devoted to partnering with you to determine the optimal solution or technology to suit your specific circRNA research project. We provide advanced, flexible, scalable, and affordable solutions utilizing mass spectrometry (MS) or next-generation sequencing (NGS) technology to help scientists deepen the understanding of circRNA biology.

Circular RNAs (circRNAs) represent a class of non-coding RNAs with the 3' and 5' ends covalently linked. They are generally produced by alternative splicing of pre-mRNA, in which a downstream splice donor is joined to an upstream splice receptor in a process known as "backsplicing". Some studies have found that circRNAs are expressed in diverse eukaryotic organisms and are conservative across mammals. Most circRNAs consist of a single exon or multiple exons and have tissue-specific expression patterns. circRNAs were once considered to be "junk" except the testis-specific circRNA from the sex-determining region Y. In recent years, the advent of next-generation sequencing and circRNA-specific bioinformatics algorithms enables the discovery of thousands of circRNAs in eukaryotes and further prediction of circRNA function and underlying mechanisms. Many circRNAs are found to exert important biological functions by acting as microRNA (miRNA) sponges, by regulating protein function or by being translated themselves in a cap-independent manner. RNA-seq has revealed dysregulation of many circRNAs in various diseases such as neurological disorders and cancer, suggesting their engagement in disease development and progression and their potential as biomarkers. 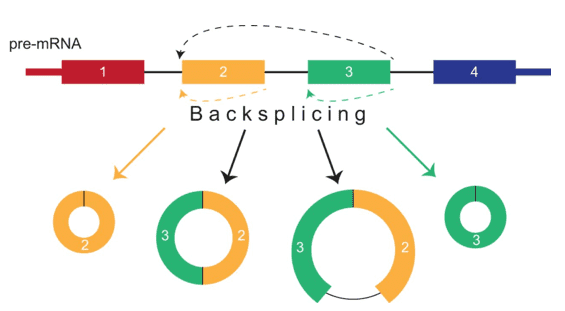 Our Solutions for Comprehensive circRNA Research

We provide a wide range of mass spectrometry (MS) and NGS approaches to help you achieve the following research purposes.

We offer in vitro and in vivo experiments coupled with NGS or MS to detect circRNA-protein interactions. Our solutions include CLIP-seq, RIP-seq, ChIRP-seq, ChIRP-MS.

m6A is an abundant modification present on circRNA. We provide NGS-based approaches such as MeRIP-seq to comprehensively detect circRNA m6A modifications.