Acetylation in RNA and How Does acRIP Sequencing Facilitate the Study?

Acetylation in RNA and How Does acRIP Sequencing Facilitate the Study?

Introduction to Acetylation in RNA 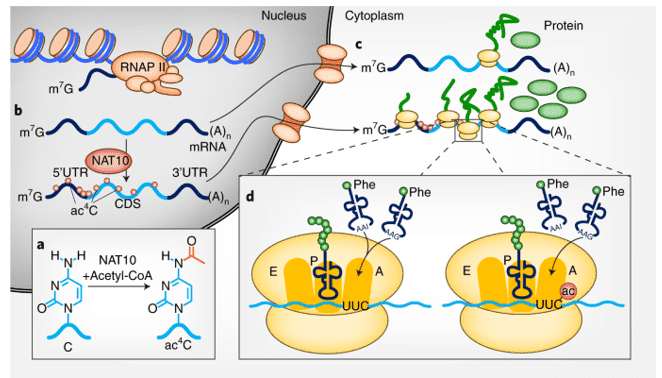 Based on a study, histone acetylation and/or acetylation of UBF or one of the other elements of rDNA transcription may be involved in affecting these dynamic changes instantly. The benefits of acRIP sequencing, on the other hand, include the generation of thousands of ac4C-enriched transcribed areas, high-resolution ac4C transcriptome mapping, and low cost. Temperature causes a significant increase in Ac4 C, and acetyltransferase-deficient archaeal strains have temperature-dependent growth defects. Cryo-electron microscopy was used to examine the temperature-dependent distribution of ac4 C and its potential thermoadaptive role in wild-type and acetyltransferase-deficient archaeal ribosomes.

In eukaryotes and prokaryotes, ac4C is a conservative chemical modification. Previously, it was thought that ac4C only existed in tRNA and 18S rRNA; however, recent research has revealed that ac4C is also abundant in mRNA, with the majority of the enrichment sites appearing in coding sequences (CDS). The acetylation of N4-acetylcytosine by the ac4C modifying enzyme is known as ac4C acetylation. Ac4C acetylation is a new type of RNA modification that affects RNA stability and alternative splicing, as well as regulating gene expression, and is expected to become a novel epigenetic transcriptomics approach. acRIP sequencing can reveal the full picture of ac4C modification in a variety of RNA molecules quickly. The technique utilizes acetylated modified fragments enhanced by RNA co-immunoprecipitation as raw materials, extracts mRNA containing ac4C modifications, and integrates high-throughput sequencing technology with bioinformatics analysis, allowing systematic studies of ac4C modification in the transcriptome. acRIP sequencing can analyze the distribution and changes of ac4C in the transcriptome in great detail, allowing researchers to better understand the role of RNA acetylation in life and disease, and allowing for more precise disease diagnosis and treatment.

The benefits of acRIP sequencing, on the other hand, include the generation of thousands of ac4C-enriched transcribed areas, high-resolution ac4C transcriptome mapping, and low cost.