What Are tRFs and tiRNAs and How to Study Them?

What Are tRFs and tiRNAs and How to Study Them?

The anticodon loop of tRNAs may be precisely spliced into tRNA halves under the influence of sex hormone, hypoxia, and other stress situations (tiRNAs). For many years, the role of tRNA-derived fragments (tRFs) and tiRNAs has been overlooked. Significant functions of tRFs and tiRNAs have only recently been found. tRFs and tiRNAs have key regulatory functions in major disorders such as cancers, metabolic diseases, and neurological diseases, acting as signal molecules and gene expression regulators. 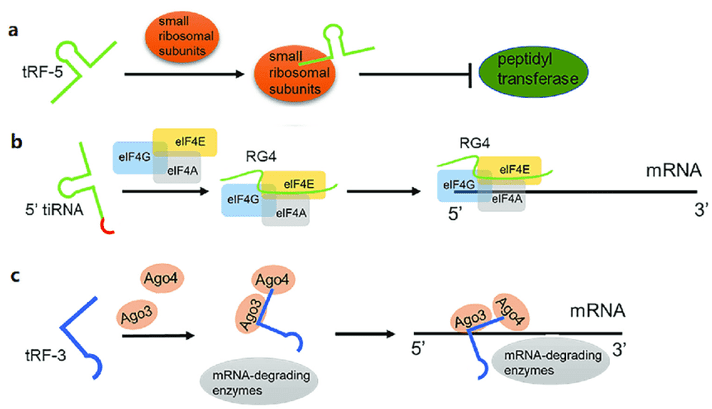 Biogenesis and Classification of tRFs and tiRNAs

The tRNA-derived short RNAs (tsRNAs) can be split into two categories based on the cleavage sites (1) tRFs, which are 14–30 nt in length and derived from mature or precursor tRNAs; (2) tiRNAs, which are 29–50 nt in length and created by specialized cleavage at the mature tRNA anticodon loop and are activated by stress.

TiRNAs are classified into two subclasses based on whether they contain a 5' or 3' sequence 5'tiRNAs and 3'tiRNAs. 5'tiRNAs begin at the mature tRNA's 5' end and end at the anticodon loop; 3'tiRNAs begin at the anticodon loop and end at the 3' end of the mature tRNA. Unlike microRNAs (miRNAs) and small interfering RNAs (siRNAs) produced by Dicer or type III RNase enzymatic cleavage, tiRNAs are cleaved by angiogenin (ANG, also known as RNY1 in yeast) and have a 5' hydroxyl group rather than a 5' phosphate group. Cancer cells create a 5'tiRNA in response to stress, whereas sex hormone-dependent tRNA-derived RNAs (SHOT-RNAs) are formed in response to sex hormones. Under hypoxic conditions, 5'tiRNAs and 3'tiRNAs can also be generated.

tRFs are classified as tRF-1, tRF-2, tRF-3, tRF-5, and i-tRF depending on the sources. RNase Z or its cytoplasmic counterpart ribonuclease Z 2 cleaves the 3' end of precursor tRNA to produce tRF-1 (ELAC2). A poly U sequence may be found at the 3' terminus of tRF-1. tRF-2 is a novel tRF that is made up of tRNAGlu, tRNAAsp, tRNAGly, and tRNATyr. The anticodon loop on tRNA is broken into tRF-2, eliminating the 5' and 3' end structures. It is induced in a hypoxic environment. Cleavage of ANG, Dicer, or members of the ribonuclease family produces tRF-3, which is obtained from the 3' end of mature tRNA. At the T-loop, there's a superfamily. As a result, the tRF-3 tail has a CCA structure that is particular for the mature tRNA's 3' end. The tRF-3 consists of two primary elements, tRF-3a and tRF-3b, which are 18–22 nt in length. The D-ring decomposes tRF-5, which is formed from the 5'-end of tRNA. Dicer cleavage at the D-loop of tRNA produces tRF-5, which is less than 30 nt in length. There are three sub-categories of tRF-5 tRF-5a, tRF-5b, and tRF-5c. i-tRF is mostly found in the mature tRNA's internal region.

The application and development of RNA high-throughput sequencing have resulted in the discovery of an increasing number of tiRNAs and tRFs. More forms of RNAs, such as tRNA, rRNA, snoRNA, and scaRNA, can be detected using high-throughput sequencing techniques. Because tRFs and tiRNAs are so little (14–50 nt), it's important to think about how to tell the difference between genuine tRFs and random degradation fragments. tRFs and tiRNAs can be detected using quantitative reverse transcription-polymerase chain reaction by developing particular amplification primers (qRT-PCR). Northern blot can also be used to detect the expression of tRFs and tiRNAs. Mitochondrial and Nuclear TRF Mapping, a method and software package for identifying tRFs in short RNA-seq datasets quickly, deterministically, and exhaustively, was recently created.