What Is Internal m7G in RNA and What Can m7G MeRIP Sequencing Tell Us?

What Is Internal m7G in RNA and What Can m7G MeRIP Sequencing Tell Us?

Post-transcriptional regulation of mRNA fate is aided by mRNA modifications. Although N6 -methyladenosine (m6 A) has been shown to influence mRNA metabolism in mammals, it has also been hypothesized that positively charged base modifications, such as N1 -methyladenosine (m1 A), could tune RNA secondary structures of protein-RNA interactions within mRNA via a combination of electrostatic and steric effects. The ubiquitous mRNA cap N7-methylguanosine is another positively charged modification (m7G). m7G is co-transcriptionally inserted at the 5' cap during transcription initiation. This critical cap modification protects transcripts from exonucleolytic degradation and regulates nearly every stage of the mRNA life cycle, including transcription elongation, pre-mRNA splicing, polyadenylation, nuclear export, and translation. 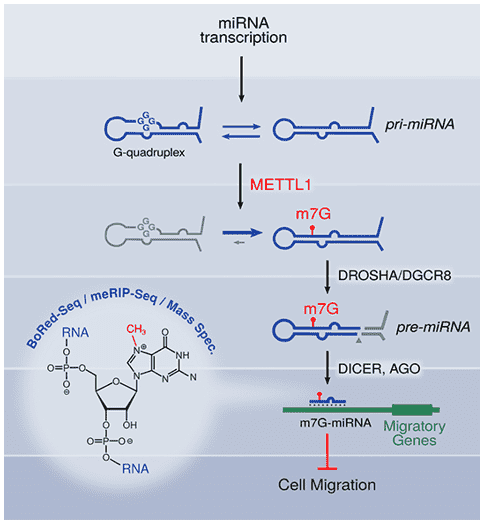 m7G is found internally in tRNA and rRNA, in addition to being part of the cap structure. In yeast and mammals, the heterodimers Trm8-Trm82 and METTL1-WDR4 install m7G at position 46 of cytoplasmic tRNAs, respectively; it also happens at position 1639 of human 18S rRNA, installed by human WBSCR22. Internal m7G modifications have been linked to human diseases and have an impact on RNA processing and function. WBSCR22 is engaged in the biosynthesis of the 40S ribosomal subunit as well as late nuclear pre-rRNA processing. In yeast, mutations in the m7G46 methyltransferase complex (Trm8-Trm82) led to a rapid tRNA degradation and growth deficiency; human homologs (METTL1-WDR4) are linked to microcephalic primordial dwarfism.

N7-methylguanosine (m7G) is a positively charged alteration found at the 5' caps of eukaryotic mRNA and at specific internal positions within tRNAs and rRNAs in eukaryotes. It controls nearly every step of the mRNA life cycle, including mRNA export, translation, and splicing. m7G can also control miRNA biosynthesis and biological functions, as well as tRNA stability and 18S rRNA intracellular processing and maturation. M7G RNA methylation is a hot spot in the epigenetic transcriptome because it is a new type of RNA methylation modification. The precise identification of m7G sites in the transcriptome will reveal biological functions and mechanisms. m7G MeRIP sequencing is an antibody immunoprecipitation-based high-throughput sequencing method. It can quickly produce a transcriptome-wide picture of the internal m7G methylome in biological samples from various sources. The method grabs methylated modified fragments for library preparation and then performs high-throughput sequencing using an m7G-specific antibody and peak localization for m7G modified fragments.

The m7G modification on the Hoogsteen edge does not interfere with reverse transcription, but it is sensitive to sodium borohydride (NaBH4) reduction, which has been used to create abasic sites at m7G modified RNA positions. The RNA will be cleaved at the abasic sites after treatment with aniline, allowing reverse transcription stops to be detected by mapping. This strategy was used in conjunction with an m7G specific antibody-based method (m7G MeRIP-seq) to confidently map the m7G modifications on mouse tRNAs using the tRNA reduction and cleavage sequencing (TRAC-Seq method). Two more papers describing m7G mapping methods were published recently, while this manuscript was being reviewed. Both studies merged results from m7G MeRIPseq with results from RNA reduction with NaBH4 and biotinylation of abasic sites with biotin reagents. Pandolfini et al. created the Borohydride Reduction Sequencing (BoRed-seq) method, which is based on the pull-down of biotinylated RNA fragments followed by sequencing and was applied to human miRNAs, which resulted in the discovery of several human miRNAs with m7G modifications, involving Let-7e, which was further categorized. Zhang et al. used their methodologies to map 803 m7G mRNA modifications in human mRNA as well as m7G modifications in human tRNAs, detecting m7G modifications at nucleotide resolution as a result of variations occurring as a result of misincorporation at the biotinylated sites during reverse transcription.